After featuring in one of the most esteemed magazines for one of the world’s fashion capitals, Vogue Italia, Jana Zornik and her collection Extra/Ordinary Rituals, captured beautifully by French photographer Michelle Marshall, is on display at the YKK London Showroom exhibition between 23rd July and 3rd September.

Interested in fashion from a very young age, Slovenian Designer Jana went on to study at the prestigious London College of Fashion for her MA in Fashion Artefact. Jana has already had a career full of accomplishments, including being a double finalist at the International Talent Support contest and winning the Swatch Artwork Award. Jana was also selected by trend forecaster Lidewij Edelkoort for her exhibition of young talents, with her work exhibited for the Royal Visit of Her Royal Highness, Princess Anne, at the ArcelorMittal Orbit.

Jana finds inspiration for her pieces by delving into her inner emotions, feelings and states of mind. Her collection at the showroom revolves around six fashion artefacts, originally designed for her MA at London College of Fashion in 2016. The pieces denote self-invented grooming tools for Jana’s imaginary character, “little Marta”, which through their fascinating, romanticised design turn the ordinary routine into an extra-ordinary ritual. The exhibition includes Little Marta’s artefacts such as the ‘Tooth Paste+Brush’, combining a tooth brush, a squeezing mechanism and a tooth paste in one unit easing the mundane task of oral hygiene into a modernised movement without effort. Equally, Jana’s ‘Perfu_Me’ made to measure perfume can be used conventionally,  opening the tab to dab the perfume on either side of the neck, then wafting the feathers to apply the fragrance over the upper body spreading the enchanting aura of smell.

Through her inventions, Jana describes her creative process and how she “turns the ordinary routine into extra-ordinary ritual, making it a safe place to feel beautiful, free, loved and cuddled.” Inspired by the materials themselves, supported by beautifying tool research and cultivated with man-made adjustments, the concept explores freedom of imagination and the liberty of making the world on our own terms. 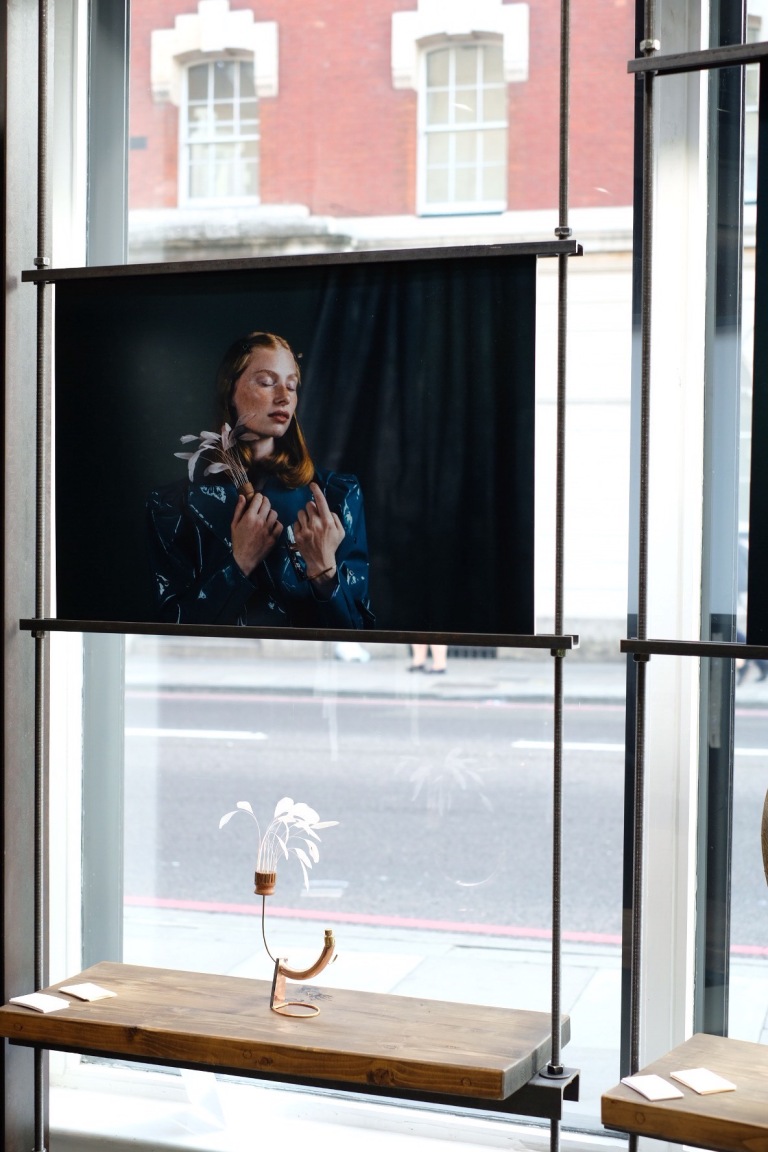 In creating the collection Jana worked with metal for the first time to construct the artefacts, which sometimes proved challenging. She explains: “The obstacle with metal is that you almost have to think in reverse and plan each step in advance, which I don`t really manage. So in a way, my personal characteristics came into the story and inside of the artefacts themselves. They have some sort of 1+1=3 logic.”

The exhibition in the showroom will also feature the portfolio of photography for the collection by Michelle Marshall, as featured in the Vogue Italia editorial under coordination of deputy editor-in-chief, Sara Maino. Michelle captures Jana’s collection of artefacts in a unique, candid, and romantic style in a series of 12 photographs.

Michelle Marshall originally from Lyon, France, came to the UK in the 90s to study photography, graduating from the University of Derby under the creative lead of influential practitioners such as John X Berger, John Blakemore and Richard Sadler to name a few. Michelle’s work mainly revolves around portraiture and she has a wealth of experience in photographing for fashion editorials. In her work, Michelle likes to work with natural light to create a candid style of photography. Michelle’s work has been showcased in i-D, Vice, Boys by Girls, Volt and Nataal magazine.

The Extra/Ordinary Rituals collection by Jana and Michelle will be on display at the YKK London Showroom in Shoreditch between 23rd July and 31st August.

We would like to take this opportunity to thank the Embassy of Slovenia for their kind support  with  the private view event.
To find out more information visit:
http://janazornik.com/projects
http://www.michelle-marshall.com/

One thought on “Transforming ordinary routine into an extra-ordinary ritual”

This site uses Akismet to reduce spam. Learn how your comment data is processed.